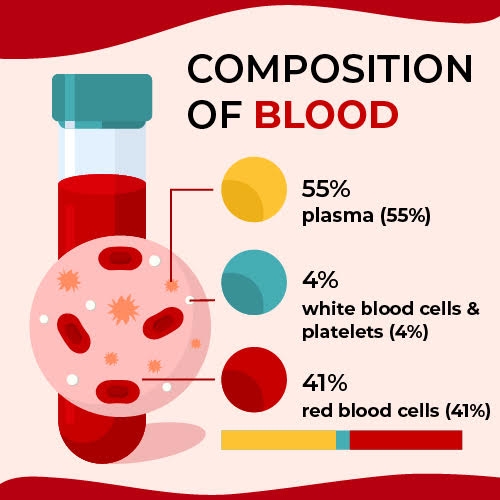 Blood Composition:
Blood is a living liquid tissue made up of cells and fluid. The fluid is called plasma which transports cellular elements throughout your body. These cellular elements are a) Red Blood Cells (RBC), b) White Blood Cells (WBC) and c) Platelets. The RBC gets their colour from a red coloured substance called Haemoglobin. They are used to transport oxygen and nutrients to various parts of the body. The WBC act like soldiers of our body that fight against infections and help in the immune system of the body. They act as defence forces of the body killing the bacteria or any other organisms entering the body. Platelets are fragments of large cell called Megakaryocyte. When there is injury/bleeding, Platelets are the starting point of the blood clotting mechanism, like the engine of a train. Platelets help in the clotting and coagulation of blood.
In early embryonic life blood cells are formed in the liver and spleen. But by the fifth month, the formation of blood begins in the bone marrow and lymphatic tissues. The RBC, granulocytes of WBC and platelets are produced mainly by the bone marrow. The orderly proliferation of the cells in the bone marrow and their release into circulation is carefully regulated according to the needs of body. Every day, old cells die and are removed from the body and everyday bone marrow produces new cells in their place.
Red blood cells have a life of 120 days and when it becomes old and senile it is thrown out. White cells live for a few days and platelets for a few hours. Thus daily new cells are added to the circulation and old are removed from it. Due to any disease/pregnancy/accidents/surgery etc. when any or all of above components of blood decrease in one’s body beyond tolerable limit, they have to be transfused to him /her to keep normal functioning of the body going.
With modern technology, blood can be separated into its components by centrifuging it. Each component can be preserved separately to be utilized later according to its shelf life. Each component can be used specifically in different treatments.
Why Component Separation?
After blood donation, blood bank separates blood components are separated from each other. Why is it necessary to do so? Blood is a mixture of cells and fluid. Patients are in need of specific component of blood and not blood as a whole. For example, a dengue patient may be in need of platelets only. It may harm him/her if unnecessarily whole blood is given to him. A patient of anaemia is in need of red cells only. Giving him whole blood may harm him/her by fluid overload to the heart for pumping.
Modern practice is of giving specific component therapy to patients instead of whole blood. Hence is the need of separating blood into its components [red cells, platelets, plasma and cryoprecipitate (Cryoprecipitate is a concentrate of blood clotting proteins)] Storage conditions and shelf life of each component is different. Various storages with specific temperature control and electricity back up are required to maintain the optimal quality of these components.
Red Cells 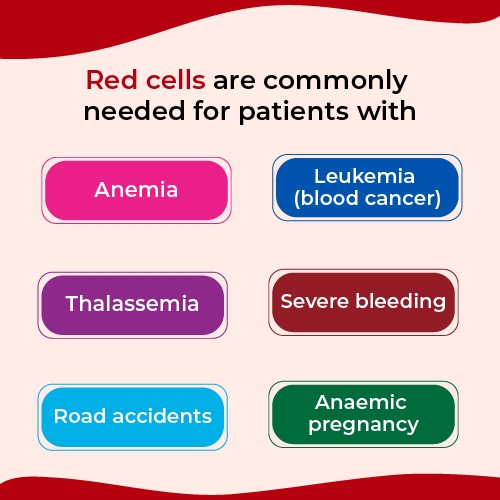 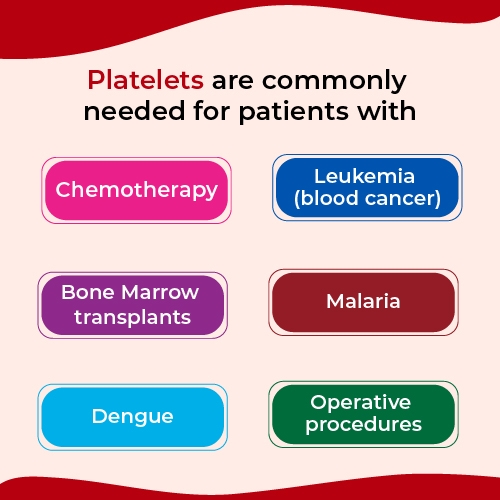 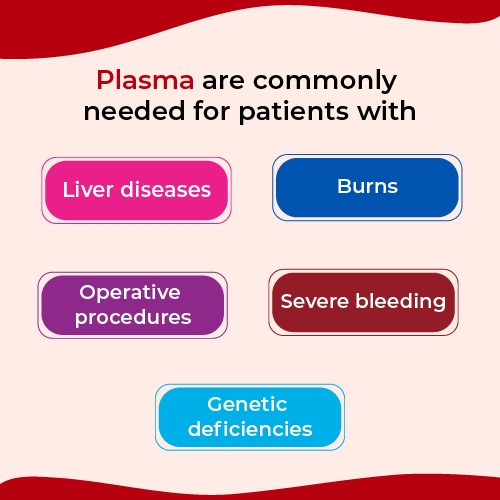 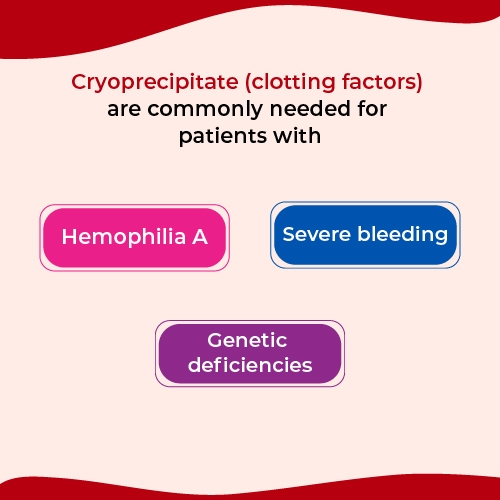 How are blood components separated from each other?
Blood is a mixture of cells and fluid, each having different specific gravity (weight). Blood is collected from the donor in a blood bag unit. This Blood bag unit has one primary bag and multiple satellite bags. Donor’s blood is collected only in the primary bag.
When this blood bag unit is centrifuged (spinning with gravitational force) all cells and fluid get arranged in layers in the primary bag as per their own specific gravity. Then by automated machines, these layers are transferred to the satellite bags, one by one. Satellite bags are then detached from each other and stored separately for use. Due to this component separation technology, one blood donation can save 4 lives!
Discovery of Blood Types
Accidents, injuries, surgeries have been a part of humankind from time immortal. Loss of blood during these is inevitable. Man in earlier times, on account of ignorance, did not know that blood transfusion could help in saving lives. And later when he learnt that it did, he did not know why transfusion was successful only a few times and otherwise failed most of the time. Human casualties were at a maximum rise during the World Wars and it was then that a systematic study of blood transfusion began.
As seen above, the components of blood in every human are the same but yet every person’s blood matches with the other. The Antigens “A” or “B” in the red blood cells of a person determines his or her blood group and is genetically inherited from one’s parents. In blood transfusions, matching blood samples is pivotal as a mismatch may lead to lethal consequences.
Different Blood Types
The ABO Blood System followed today was first discovered by Austrian scientist Karl Landsteiner. The blood groups are broadly classified into four types – A, B, AB and O. Another protein antigen “D” is also inherited from parents and this determines your “Rhesus Factor” or RhD type. The presence of this factor makes you RhD positive and absence makes you RhD negative. Together the ABO and Rh factor creates 8 subtypes of blood groups. 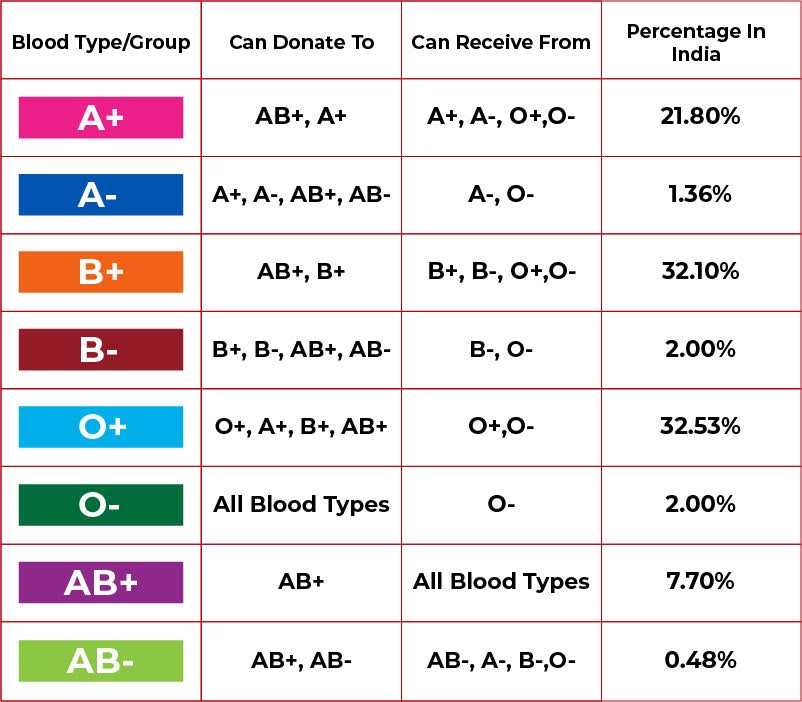 O- Blood Type is known as a Universal Donor and AB+ Blood Type is known as a Universal Receiver.
Let Us Know Something About Platelets
Platelets are tiny blood cells that help our body form clots to stop bleeding. They are actually fragments of mother cells called megakaryocytes, which are present in the bone marrow (hollow area in our long bones). Their size is just 2-3 μm (μm is micrometre = 1/106, i.e. one millionth of a metre), Life span of platelets circulating inside our body is about 8 to 9 days. Platelets separated from donor’s blood have a shelf life of five days.
The main function of platelets is to contribute to hemostasis: the process of stopping bleeding. Clotting of blood is like a train which starts with the engine of platelets. If one of our blood vessels gets damaged, it sends out signals that are picked up by platelets. The platelets then rush to the site of damage and form a plug by clumping, or clot, to repair the damage. Platelets, also called thrombocytes (thromb + cyte = "blood clot cell"). The blood clot is a temporary solution to stop bleeding; tissue repair occurs later.